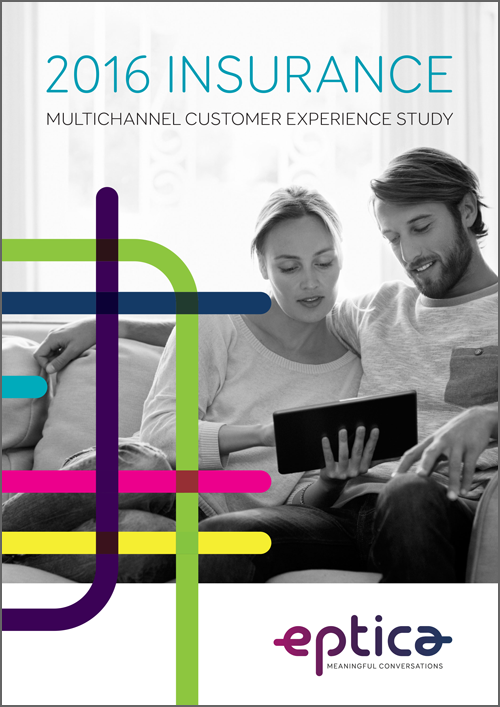 Reading, 27 April 2016: Insurers can answer under half (45%) of routine questions asked online, severely impacting the digital customer experience they deliver. However, 80% provide accurate responses to questions sent via email, according to new Eptica research. While email led the way, insurers are struggling to cope with the volume of questions received on social media – while 100% were on Twitter, only half responded successfully to a tweeted query.

The research, carried out by multichannel customer interaction management software provider Eptica, evaluated ten leading UK insurers. Repeating research carried out since 2011, it replicated consumer behaviour by measuring them on their ability to provide answers to ten routine questions via the web as well as their speed and accuracy when responding to email, Twitter, Facebook and web chat. As well as insurers, the Eptica Study also evaluated businesses in nine other sectors, including banking, utilities, telecoms, electronics manufacturers, travel and different types of retail.

Email appears to be the focus of customer service investment by insurers, showing a dramatic improvement since 2015. Every insurer offered email to non-customers, and 80% successfully answered the question sent to them – the highest sector out of the whole study. In 2015 just half gave accurate answers. However, average response times increased from 20 hours last year to 28 hours 4 minutes in 2016. Within this range there was an increasing polarisation, with times ranging from 49 minutes to 5 days 1 hour 12 minutes.

“Insurance is in the midst of a transformation as the internet and digital channels radically change how consumers engage with insurers,” said Derek Lewis, UK & Ireland Sales Director, Eptica. “To drive loyalty, insurers need to be able to have meaningful conversations with individuals, on their channel of choice. The 2016 Eptica Multichannel Customer Experience Study found that insurers are still struggling to adapt – performing well on email, but answering less than half of all questions asked online and via social media. This should be a wake up call - at a time of greater competition and pressure on margins, insurers that prioritise the customer experience are likely to gain business over their poorer performing rivals.” 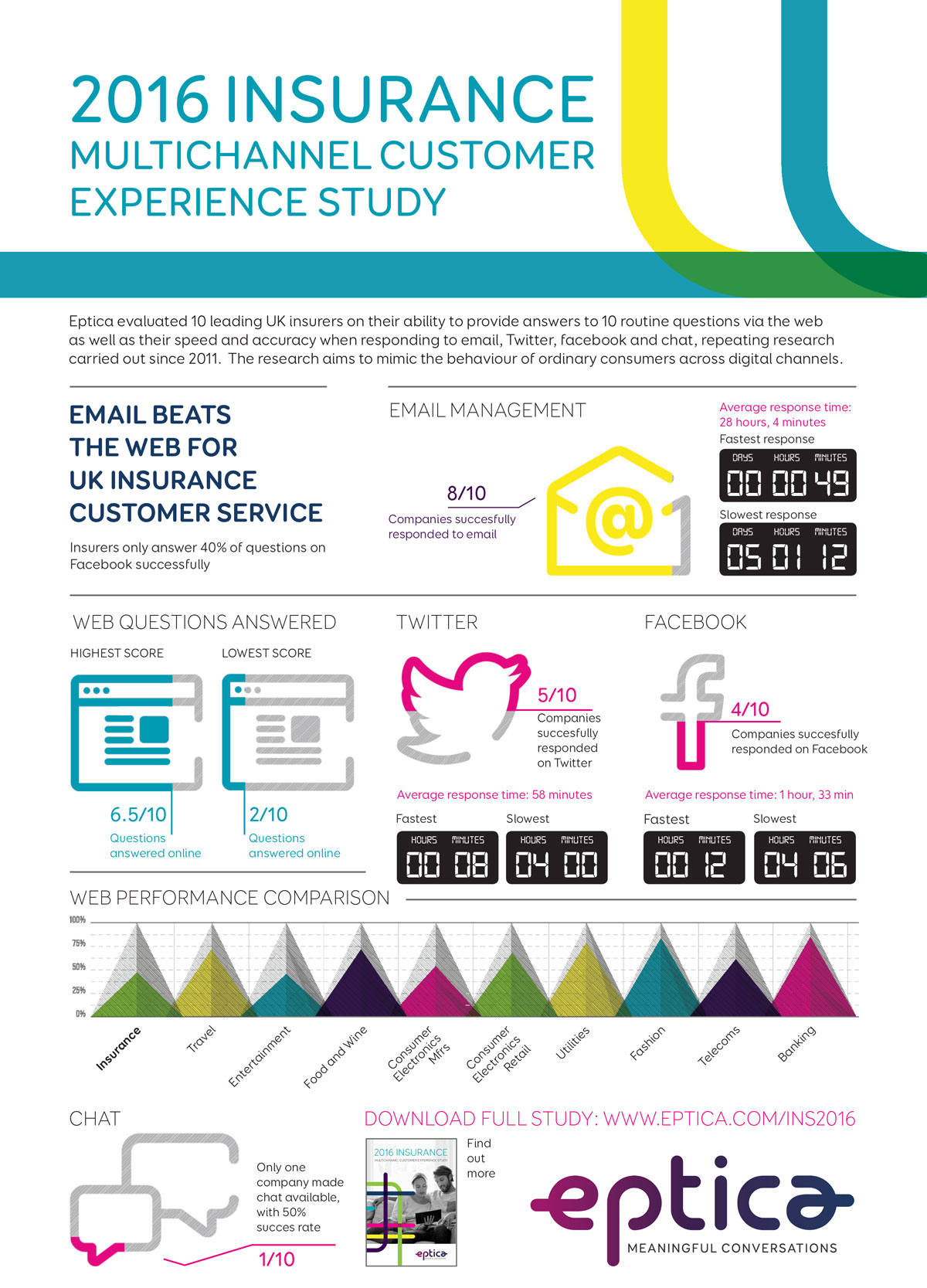 Despite improving from 40% to 45%, online performance by insurers still languished near the bottom of the sector league table. Illustrating this gulf, the best insurer answered 65% of questions, which was lower than the worst fashion retailer, which scored 70%. Too many insurers made it difficult for potential customers to find answers online, either forcing them to use other channels or driving them into the arms of competitors.

Insurers are also failing to meet customer needs on social media. While 100% were on Twitter (and 60% on Facebook), just 50% and 40% respectively responded successfully to questions. The average Twitter response time of 58 minutes was much faster than 2015’s 8 hours 52 minutes, but masked big differences in speed, ranging from 8 minutes to 4 hours. At an average of 1 hour 33 minutes Facebook was faster than email, but slower than Twitter.

Chat, the final channel surveyed, is perfectly suited to insurance as it enables consumers to have a full, meaningful and real-time conversation with an agent, at a lower cost than over the telephone. Yet the majority of insurers are not dedicating sufficient resources to chat. 40% of companies claimed they offered it (double the numbers of 2015), but just one had it operational when evaluated (the same as last year). Given that chat was able to answer the query within 2 minutes, it shows the potential of the channel – provided more resources are allocated to it.

Insurers are answering on more channels than ever before, but appear to be buckling under the strain. Only one insurer responded on the four channels of email, chat, Twitter and Facebook and overall just half (50%) of insurers were consistent on two or more channels, and 20% only answered on one channel.

The full findings, highlighting how the insurance sector performed within the Eptica Multichannel Customer Experience Study, along with recommendations for areas to focus on, are available in the Eptica Insurance Guide, which can be downloaded from http://www.eptica.com/ins2016

As part of the Eptica Multichannel Customer Experience Study, 10 insurance company websites from across the travel, motor, home and pet sectors were evaluated in six areas:

2. On the speed and accuracy of their response via their email channel

3. On the speed and accuracy of their response to a directly tweeted question

4. On the speed and accuracy of their response to a question asked on Facebook

5. For their ability to answer a question through web chat (if offered)

6. On the consistency of response across digital channels (email, Twitter and web chat)

As well as insurers, the Study surveyed brands across the retail, travel, consumer electronics manufacturers, utilities, telecoms and banking sectors in Q1 2016. The full Eptica Multichannel Customer Experience Study report can be downloaded from http://www.eptica.com/mces2016.