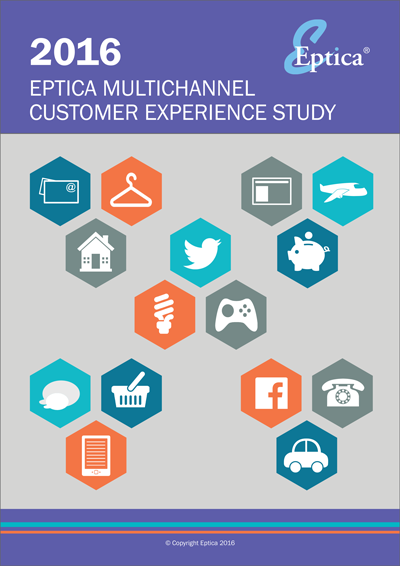 Reading, 2nd March, 2016: Despite its importance to consumers, email is falling behind social media when it comes to customer service, with UK brands answering just 38% of emailed questions, according to a new study. Twitter (48% success rate) and Facebook (44%) are both more accurate and faster at delivering responses, although a lack of consistency between channels is undermining the overall customer experience. Overall, across email, the web and Twitter, brands were only able to correctly answer 51% of questions that were put to them.

The Eptica Multichannel Customer Experience Study, released today, evaluated 100 leading UK companies on their ability to provide answers to 10 routine questions via the web as well as their speed and accuracy when responding to email, Twitter, Facebook and chat, repeating research carried out since 2011. The research, from multichannel customer interaction management software provider Eptica, aims to mimic the behaviour of ordinary consumers across digital channels.

The email channel has become slower, less accurate and less available. Just 64% of companies (10% fewer than in 2015) made email available to non-customers and the average time taken to answer emails increased by nearly 5 hours, to 34 hours 15 minutes. However, this masked major differences between industries. 80% of insurers responded accurately, yet no consumer electronics manufacturer provided a successful answer. Response times on email ranged from 3 minutes to over 4 days.

Social media cemented its position as the fastest channel for customer service. Average response times on Twitter improved from 5 hours 27 minutes to 4 hours 14 minutes. Over the past two years the time taken to respond on Twitter has halved, down from 8 hours 37 minutes in 2014. 2016 was the first year that Facebook was surveyed, and it struggled to match the speed of Twitter, with companies taking an average of 8 hours 37 minutes to respond.

The web remained the best channel for consumers looking to find answers to basic questions, with an average of 66% of queries answered online, up 2% since 2015. However accuracy varied hugely between sectors and companies. One entertainment retailer failed to fully answer a single question, yet another in the same sector asked the same 10 questions successfully, scoring 100%.

“Brands are under growing pressure to deliver a consistently high quality experience to customers, however they choose to make contact,” said Derek Lewis, UK & Ireland Sales Director, Eptica. “The sheer volume of queries and the fact that customer expectations are continually rising is having a definite effect on the performance of many companies, particularly on the email channel. Some are forging ahead, while others are falling behind, with a consequent impact on customer satisfaction, loyalty and revenues. Just 51% of all queries were answered satisfactorily. Overall, consumers are as likely to get a useful response as they are to correctly call heads or tails on the flip of a coin.”

Individual sectors seemed to perform strongly on particular channels, demonstrating a ‘uni-channel’ approach, 18% of companies only answered accurately on a single channel from email, Twitter, chat, and Facebook, while nearly a quarter (22%) failed to respond successfully on any channel. Banking, which averaged 84% of questions answered on the web, only responded to a single email, while the insurance sector answered 80% of emails but just 45% of online questions. One entertainment retailer answered a question on Facebook in 6 minutes, yet took 152 hours to respond to the very same query on email. This lack of a joined up approach is not only frustrating to consumers, but inefficient, as it pushes up costs and response times.

“Companies understand the importance of customer experience and are investing heavily in improving the service they offer to consumers,” said Olivier Njamfa, CEO and co-founder, Eptica. “However, many appear to be adopting a piecemeal approach, not joining up channels or delivering the seamless experience that customers demand. Preventing consumers from having meaningful conversations on their channel of choice will undermine relationships and drive customers away. It is time to adopt a centralised, joined-up approach that shares resources between channels, increasing flexibility, efficiency and improving service levels across the organisation.”

Despite its promise of speed, efficiency and personalisation, web chat continues to be underused. This year saw a major growth in those advertising chat (up from 26% to 44%), though just 16% had it available when surveyed. The performance of those offering chat has actually deteriorated, with 75% of companies with working chat successfully answering the question, down from 89% in 2015, and average session time increasing to 7 minutes 40 seconds. 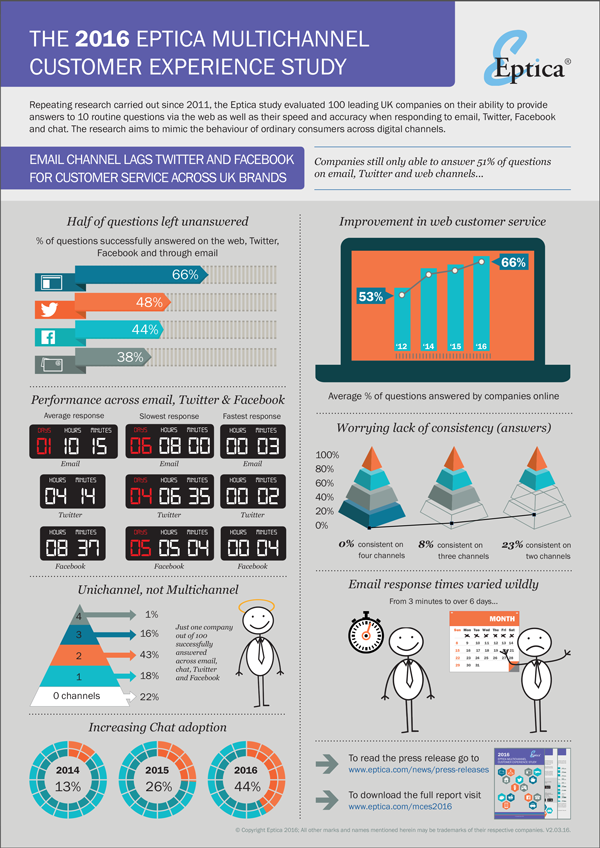 An infographic illustrating the results is available from here.