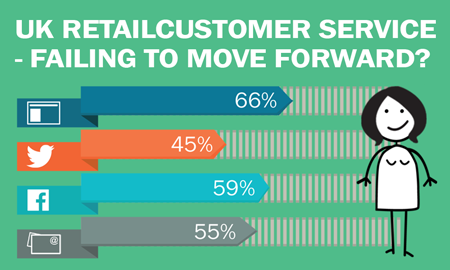 Retail is one of the most competitive sectors in the economy. Transformed by the internet, new entrants and ever more demanding consumers, retailers cannot afford to rest on their laurels.

Customers are pushing retailers to innovate and deliver new services, improved experiences at lower prices. Loyalty is a thing of the past, with consumers are now able to choose from an enormous range of suppliers at the click of a mouse, or, increasingly, a tap on a smartphone screen. Essentially shoppers want a seamless, easy to use experience that values their time and is personalized to their needs. These factors increase the focus on the customer experience as the key point of differentiation for retailers.

Therefore, you’d expect customer service to be continually improving, but the 2016 Eptica Retail Multichannel Customer Experience Study found that this isn’t the case. The performance of many companies and channels remains static, while in other areas it is deteriorating, rather than improving.

Replicating research carried out since 2011, the Study evaluated 40 leading UK retailers, split between 4 sectors (food & wine, consumer electronics, entertainment and fashion) on their ability to provide answers to 10 routine questions via the web as well as their speed and accuracy when responding to email, Twitter, Facebook and chat.

Static performance
Overall, the UK research found minor changes in performance since 2015, with the total number of questions answered on the web, email and Twitter remaining static at 55%.

Your best chance of getting a response to a routine query sent to a retailer is to use Facebook, which was evaluated for the first time in 2016. UK retailers successfully answered 59% of questions asked on Facebook, compared to 55% on email (down from 58% in 2015), and 45% (up 2% year on year) on Twitter. However, performance varied. Just one food and wine retailer replied on Facebook, despite 90% offering the channel and even then it failed to provide a helpful answer.

What is the fastest channel for answers?
For those looking for responses in a hurry, company websites provided the best option, successfully answering 66% of questions, up 1% from last year. However, this still means a third of questions are simply not being covered.

Speed on other channels varied wildly. Twitter was the fastest, taking an average of 5 hours 40 minutes to reply. Facebook followed on 6 hours 36 minutes, with email trailing in behind with an average of 32 hours 53 minutes. These averages also masked big differences in response times. One retailer emailed a response in 3 minutes, yet another took over 6 days! An entertainment retailer took 152 hours to answer an email, then responded to the same question on Facebook in 6 minutes.

Consistently uni-channel
Perhaps due to the increasing volume of questions they are receiving, many retailers seem to be struggling to cope across multiple channels. No company provided successful answers across the four channels of email, Facebook, Twitter and chat, and just 10% were consistent across three of these channels. 68% of retailers (including all ten food and wine companies) did not provide any consistent answers at all on more than one channel, either because the responses did not match or due to lack of accurate replies at all. 10% fewer companies allowed non-customers to email them compared to 2015.

This move to reduce the available channels means that consumers are less likely to receive an answer on their channel of choice, forcing them to switch – or driving them into the arms of the competition. The resource squeeze was also evident when it came to chat. While 43% of retailers claimed to offer it, only 13% of companies had it operational when tested, potentially due to not having the personnel to staff it, as they were occupied on other channels. The performance of those retailers offering chat has actually deteriorated since last year, from 100% successfully answering the question, down to 60% in 2016. The average time to answer nearly doubled from 5 minutes 30 seconds to 9 minutes 40 seconds.

Entertainment lags behind
Comparing the performance of different retail sectors, entertainment remained bottom (answering 38% of questions on the web, email and Twitter), followed by food and wine (60%), consumer electronics retailers (55%) and fashion (68%). With retailers increasingly offering more products, and expanding into new areas, consumers have a much wider choice of who to buy from, whatever the sector, so will gravitate to those that offer the best level of service. This spells potential problems for entertainment retailers that are falling behind their peers in other sectors.