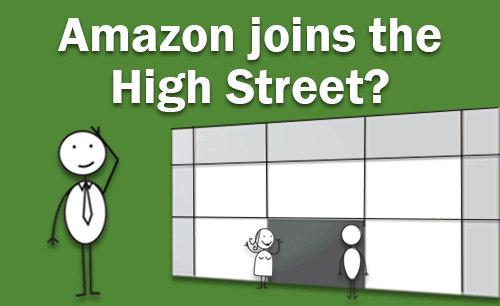 If recent media rumours are to be believed, Amazon is planning to open its first bricks and mortar outlet, located in the heart of New York City, close to the Empire State Building and world famous department store Macy’s. The opening is said to be scheduled ahead of this year’s holiday shopping season.

The move, if true, looks like a big change in direction for an ecommerce giant which until now has totally focused on the online channel. However, there may be some strong underlying reasons that explain why Amazon appears to be going against the grain and dipping a toe into physical retail. Here are three key ones:

1. Flagship location Opening a store across the street from the Empire State Building, which boasts 4 million visitors a year will serve as a giant advertisement for Amazon’s online operation. It would be a flagship store where consumers could try out its own products, such as Kindle e-readers and Fire phones, in a similar vein to the outlets opened in major cities by the likes of Apple.

2. Click and Collect Many experts believe one of the real drivers for the store would be to serve as a central hub for delivering online orders. There is a huge, growing demand for click and collect services. For example, in the UK it is something that 35% of Britons like to use. Obviously at present Amazon doesn’t have the physical stores that many of its rivals possess, making click and collect difficult. Similarly, the store could be a convenient way of supporting product returns for customers in the New York area.

3. Same day delivery A third reason could be that Amazon wants to develop the site as a distribution centre to allow same day deliveries to local addresses. This seems increasingly credible in the light of Amazon’s move into selling ‘need-it-now’ items such as groceries and household goods which need to be delivered on the day. Essentially the building will act as a giant warehouse, with a shop on the front.

Amazon isn’t alone amongst pure-play online operations that have looked at expanding to have a physical presence. eBay did something similar a few years ago with its London pop up store. Given the importance of multichannel, including the High Street, to retail, it makes sense for ecommerce specialists to focus on building their capabilities in the physical world.

The challenges of extending the Amazon brand to a physical environment

However, Amazon will certainly face some new challenges if it wants to succeed in bricks and mortar retail. Here are three of the main ones:

1) Differences in customer service across channels Amazon’s online customer experience is consistently rated highly by analysts and consumers. However, it is based on an automated, self-service model. A physical store has a different dynamic which involves face to face service. This requires people, all of whom have to be trained, motivated and monitored. Amazon will therefore need to work hard to extend its enviable reputation for online customer service to a physical environment.

2) Extending its USPs to the real world Having made its name by pioneering ecommerce features such as online profiles, wish lists and reviews, Amazon will need to find ways to make it easy for shoppers to access and build on these elements in physical stores.

3) Delivering the range of products Amazon is known for selling millions of products through the web – and, for many, is the de facto start point for online shopping. Given it offers 230 million items for sale in the US alone, it clearly can’t sell all of these in store. The company will therefore need to find a way to narrow down its focus and product catalogue. Does it, for example, look at high ticket items that people want to try before they buy or those that people want to receive quickly?

Whether the speculation about Amazon’s New York store is true or not it demonstrates the importance of multichannel to the retail world. Consumers value convenience and quality above all, meaning that, if they want to succeed, retailers need to make sure they can deliver the right experience seamlessly across the physical and online world.