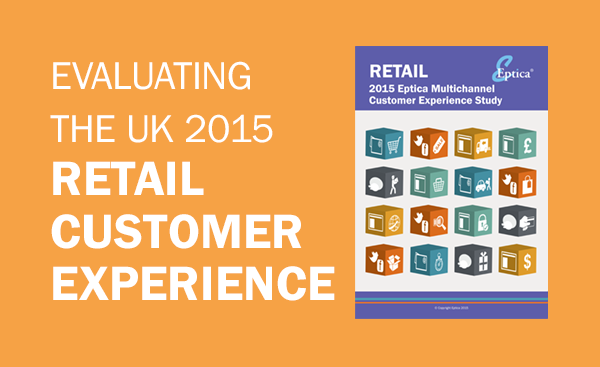 Retailers face growing market challenges. Despite the UK climbing out of recession, consumer confidence is still fragile and likely to remain so in the face of a number of uncertainties on the horizon; a potential hung parliament, eurozone worries and interest rate rises. It’s not surprising that shoppers are still price sensitive, and are happy to move to rivals.

Competition is fierce, as newer, more agile entrants undercut traditional leaders in many parts of the industry. Consumers are continually demanding more – better prices, better service and a better experience. Retailers that cannot offer this across every channel risk losing out to those that are able to understand and meet customer needs.

In order to evaluate how far retailers have moved towards providing a consistent, multichannel experience Eptica recently researched 40 leading retailers. Part of the annual Eptica Multichannel Customer Experience Study, the research evaluated leading brands on their ability to provide answers to ten routine questions via the web as well as their speed and accuracy when responding to email, Twitter and web chat.

The findings were disappointing. Despite their investment in digital channels, retailers could only answer 55% of questions asked via the email, Twitter and web channels. Essentially 45% of queries are being either ignored or consumers are being sent responses that do not answer their question, forcing them to make contact again. Breaking it down channel by channel there were significant variations between sectors and individual brands:

Email
Email performance worsened between 2014 and 2015. While 98% of retailers provided consumers with the ability to email them, just under three quarters (73%) answered messages sent to them. 15% provided a response that didn’t answer the question, meaning that only 58% of queries were successfully responded to. This was 5% lower than 2014.

Speed of response has also deteriorated. In 2014 the average time taken to respond to an email was 35 hours 43 minutes. In 2015 it had increased by over 8 hours to 43 hours 52 minutes. There were major differences in performance between sectors – consumer electronics retailers answered 80% of emails, while entertainment retailers managed just 40%. One retailer successfully answered an emailed question in 9 minutes yet another took over 30 days.

Web
The web remains the most successful channel for digital customer service, with retailers providing answers to 65% of questions, up 5% since 2014. Fashion retail, which has topped the overall study for the past three years, dropped behind banking, but still provided answers to 78% of questions. Electronics and food & wine retailers both saw significant improvements, increasing average scores by 13% to 70% and 64% respectively. However entertainment lagged behind, scoring just 52%, exactly the same as in 2014. Four entertainment retailers improved, but the performance of four worsened, while two stayed the same.

Twitter
How retailers use Twitter for customer service is improving. 88% of retailers were on the social network (up from 83% in 2014) yet only 43% successfully responded to a tweet. That means that 57% of companies are not able to provide an answer on Twitter – showing that insufficient resources have been put in place to cope with the growing demands of the channel. All retailers that responded on Twitter successfully answered the question, a major difference compared to email.

Twitter response times ranged from the lightning fast to the incredibly slow. Two food and drink retailers answered in 2 minutes, while one fashion retailer took over 35 hours to reply. However, despite improving, Twitter still lagged behind email for accuracy – 58% of email questions were successfully answered, against 43% of tweets.

Overall, the Eptica Multichannel Customer Experience Study found that too many retailers are failing to deliver the service that customers expect and increasingly demand. In competitive markets this will impact them in two ways – either dissatisfied consumers will simply move to more responsive competitors or they will escalate their complaints, adding to the workload of hard-pressed customer service teams. With the peak Christmas season now over, retailers need to evaluate their multichannel customer service and make improvements now, ready for the 2015 holiday season.