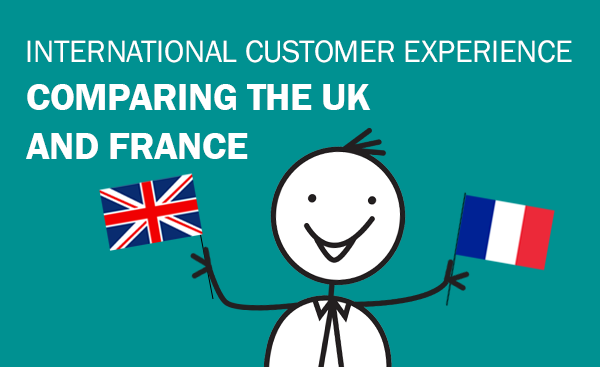 Earlier this year Eptica released the 2015 UK Multichannel Customer Experience Study. Covering 10 sectors, it researched the strength of the customer experience delivered by 100 leading brands across the web, email, Twitter and chat channels. Some of the key findings were that:

Similar research has just been carried out in France, providing the opportunity to compare and contrast the customer experience in the two countries. The French study surveyed 110 companies, and also asked questions via Facebook, as well as on the web, email, Twitter and chat. How do the two countries compare on different channels?

1. The web
The ecommerce market is much larger in the UK and France – research from RetailMeNot expects UK consumers to spend £52.25 billion online in 2015, the equivalent of £1,174 per person. In contrast the French market is predicted to hit £30.87 billion over the same period, with spending at £847 per head.

On average, French companies could answer 46% of questions asked on their corporate websites. In comparison, UK brands provided successful responses to 64% of queries. As well as relative market size, this gap could be explained by the higher number of UK brands (56% vs. 34%) that had installed self-service software on their sites.

2. Email
French brands are significantly ahead of their UK counterparts on the email channel. For example, 75% of French companies provided email contact details online. Even though this had dropped by 6% since 2014 it was still just above the UK’s 74%. Response times were faster in France – 59% answered in less than 24 hours compared to an average UK reply time of 29 hours 27 minutes. Finally, UK brands were less likely to successfully answer the question, with just 39% providing a useful response. In comparison over half (52%) of French emails received a successful answer. Clearly, UK brands continue to lag on this vital channel.

3. Social customer service
French brands have also embraced social media, more readily than those in the UK. 81% of UK and French companies had a Twitter handle, but experiences then diverged. 59% of French brands provided an answer on the social network, compared to 54% of those in the UK and there were significant discrepancies when it came to accuracy. 58% of French companies successfully answered a tweet, alongside just 41% of UK brands. Over a quarter of French answers (28%) were received within an hour.

The French study also researched Facebook response rates. This scored highest of all channels, providing successful answers to 63% of queries, with 72% of replies received within 24 hours.

4. Chat
Despite its benefits to both consumers and brands, chat is an under-used channel in both France and the UK. Just 9% of UK brands and 15% of French ones had chat available when they were tested. The UK did score significantly higher on chat accuracy, with an average of 93.5% of queries being successfully answered, compared to just 53% in France. This shows that greater investment is needed in equipping French chat agents with the knowledge they need to answer customer queries, if the channel is to be adopted more widely.

5. Consistency
We live in a multichannel world, and consumers expect the same high levels of service and accurate responses, however they make contact. On both sides of the channel, this isn’t yet the case. In France the number of brands providing consistent answers through at least two channels has risen from 10% to 15%. In the UK just 11% of companies delivered similar answers through two channels. This points to two factors: 1) a lack of joined-up, centralised customer service where information is shared between channels and 2) a squeeze on resources that means that brands are essentially downgrading the experience on some channels. Neither of these will help companies succeed in the long-term, particularly against better resourced and more integrated rivals.

The differences between the French and UK customer experience are not just of academic interest. Globalisation means that brands face increasing competition from rivals from beyond their borders, while a growing number of consumers want to buy from brands that give them the best experience, irrespective of location. According to recent research from Forrester, European online cross-border sales will reach €40 billion by 2018, growing at a compound annual growth rate (CAGR) of 11% between 2013-2018. Companies in both France and the UK need to focus on the gaps in their customer experience and learn from those that are doing well if they are to engage with consumers, increase loyalty and safeguard future revenues.