Lack of understanding holds back engagement in UK and France

Lack of understanding holds back engagement in UK and France 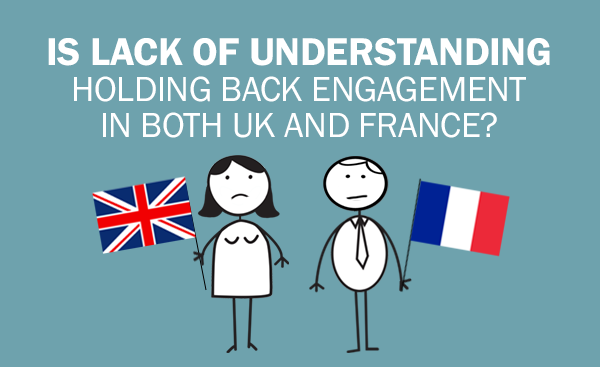 In a previous post I looked at the biggest frustrations amongst UK consumers when they dealt with brands through digital channels such as email or social media. Research carried out by Epticahighlighted that a lack of understanding and a failure to acknowledge their feelings were not just holding back engagement, but actively causing consumers to switch supplier.

The Eptica Study: Consumers vs. Agents: Can the Gap be Closed?, has now been repeated in France. The strongest finding is how consistent the results are with those from the UK – consumers on both sides of the Channel are frustrated with the understanding gap and agents recognize the issue, but feel they can do nothing to help.

The growing gap
78% of UK consumers ranked getting a response that either partially, or completely, failed to answer their question in their top two biggest frustrations. 31% said that failure to acknowledge upset or anger was a major issue. In France 63% of consumers listed unpersonalized responses, partial answers or replies that failed to help as their number one issue. Waiting a long time for an answer was highlighted by 38% of French consumers as their biggest frustration.

Consumers overwhelmingly now use email to contact brands, with 87% of UK consumers (and 83% of the French) selecting it as their primary communication channel. This growth in digital channels is widening the understanding gap, as text-based communications are fundamentally more difficult to understand than face to face or voice-based channels as they lack context or visual/verbal clues. This adds to the challenge of dealing with an expanding number of digital enquiries from increasingly impatient consumers.

Customers in both countries are increasingly happy to switch suppliers after poor experiences. 82% of Britons said they always or often switched supplier if they failed to correct their mistakes, slightly behind French consumers (83%). Of these 55% of the French, and 41% of British, consumers said that they would stay provided that their issue was sorted out quickly and they received an apology/compensation.

The agent perspective
Frontline customer service staff recognize the problem. 71% of British agents listed understanding the language and vocabulary that consumers used in their top two frustrations, as did 54% of French agents. Nearly a third (32% in the UK, 31% in France) found it hard to recognize anger or upset in written communications.

Agents see there is a growing issue, but feel powerless to help. 71% of British contact center agents believe that the number one customer frustration was receiving inadequate or partial answers, a concern echoed by 49% of French agents. 85% of UK agents thought consumers would be likely to switch if they received poor service, although just 78% of French agents agreed.

The technology solution
When asked what would help them work more productively and give them better insight and understanding, agents in both countries want improved technology. Over half (53%) of French agents, and 51% of UK ones, listed technology that analyses questions and suggests relevant information as their 1st or 2nd choice. The ability to prioritize answers based on tone (anger, sadness, happiness) was specified as a priority by around half of agents (50% in the UK and 49% in France). Finally, agents wanted better, centralized knowledge bases that provided faster access to more consistent answers, with this choice selected by 34% of British, and 39% of French agents. We’ve also outlined some other ways that technology can help bridge the gap in this blog post.

The full findings of the research along with recommendations for areas to focus on, are available in the Consumers vs. Agents: Can the Gap be Closed? management report which can be downloaded from http://www.eptica.com/power-linguistics.